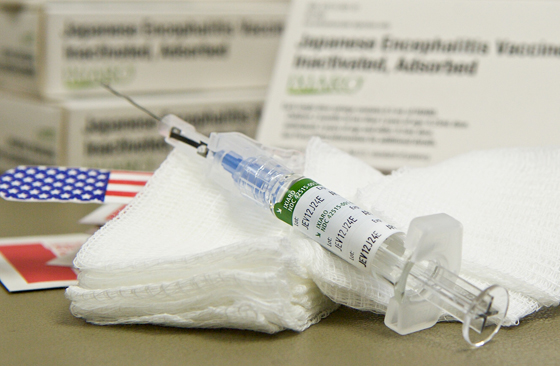 A new mandate from the United States Air Force requires all active-duty airmen who will be stationed in Japan or the Republic of Korea for more than 30 days to receive a Japanese Encephalitis vaccination.

The mandate, which was signed into effect by Air Force Surgeon General Lt. Gen. Thomas Travis on January 9, went into effect on February 1.

Although the Japanese Encephalitis vaccination has been available since 2009, it was not made mandatory by the US Air Force until now. Normally, the military mandates that service men and women receive all vaccines recommended by the Centers for Disease Control for the destination at which they will be stationed, and the new requirement is meant to bring USAF standards in line with CDC protocol.

Family members of affected airmen who may be living in Japan and South Korea are not required to receive the two-shot series immunization, but it is recommended. Especially if you are a service member or a family member of a service member who is stationed in Japan or Korea, please review the interactive map below of the bases that are affected by change in regulations.

Click on the dropped pin representing each base to learn more about that area.

“We encourage everyone to get this vaccine, Airmen and their families,” said Lt. Col. Randy Langsten, Pacific Air Forces Surgeon General, in a release posted on the PACAF website. “Medical readiness is important to our Airmen, but so are their families. We want our people focusing on the mission instead of worrying about a family member being susceptible to JE. Bottom line, we are committed to keeping everyone safe and healthy.”

The PACAF release suggests that anyone affected contact their local medical treatment facility for additional information. If, for some reason, the vaccine is not available right away, the Air Force has given a list of preventive measures that may be taken including using EPA-registered mosquito repellent and wearing mosquito resistant clothing. The vaccine is available at all Passport Health clinics nationwide.

Japanese encephalitis is a potentially severe mosquito-borne disease that can cause inflammation of the brain. The best preventive measures, according to the CDC, are repellants, sleeping in well-screened rooms and receiving a Japanese Encephalitis vaccination.

For more information on the disease and how to schedule your appointment to receive the immunization against it, visit Passport Health’s Japanese Encephalitis web pages.

Do you know someone who may have been affected by this change? Comment below or on the Passport Health Facebook page. We would love to hear from you!