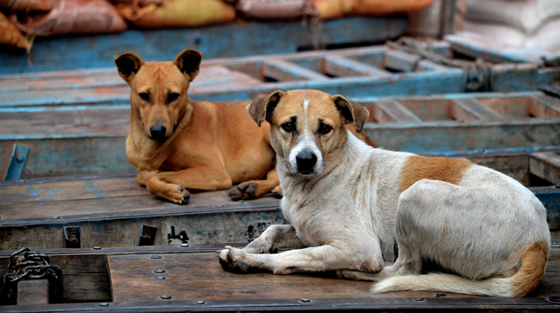 Scientists are suggesting a radical idea to end rabies throughout the world; although it might seem crazy, this idea may well work. Wildlife veterinarian Felix Lankester, in a commentary published in Science, has said that the best way to combat the deadly disease might just be to vaccinate the world’s dog population.

The plan seems a little farfetched on the surface. It’s estimated that India alone has as many as 30 million street dogs, and according to estimates, as many as 70% would need to be vaccinated in order to reduce rabies cases to near extinct levels. But, Lankester has started an interesting child-based program that has been highly effective.

He and his team have traveled around the rural areas of Tanzania vaccinating dogs. They start around dawn with the goal of attracting as many children as possible. Generally, in these areas, street dogs are as much pets as anything else, and they will follow the children around. As interest picks up throughout the day, the clinical team ends up vaccinating around 1,000 dogs per day.

Since Lankester started the program, rabies fatalities in northeastern Tanzania have dropped from around 50 each year to nearly zero. Similar programs have been just as effective in other parts of the world, with cases in North and South America dropping to less than 20 last year.

While not a perfect system, Lankester’s idea has serious merit. The vast majority of rabies cases come from rabid dogs, and just a small percentage are caused by squirrels or bats that have contracted the disease. As was mentioned in a previous post, vaccinating humans against the disease isn’t the most feasible or cost effective option, but treating dogs directly may well be.

The average vaccination for a canine costs about $3, while rabies treatment in humans can cost as much as $50 per case in regions like Southeast Asia. Ultimately, funding will determine how well this program works. With limited funds, it will be very difficult to hit the 70% benchmark in some areas, but the World Health Organization goal of eliminating rabies in Africa and Asia by 2020 might help get some additional funds to this project.

Even a slight reduction in cases will have a significant impact, as nearly 70,000 cases of the virus occur each year.

What do you think the best way to combat rabies is? Tell us in a comment to this post!