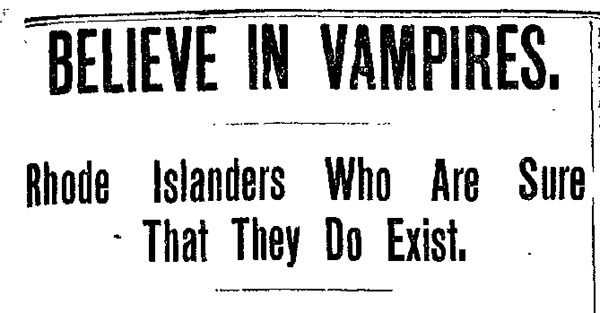 Today, when we think about vampires, our minds conjure up images like those a la Edward from the Twilight book and movie franchise. We have romanticized the image of the vampire, which is far removed from the origins of the original vampire myth that took hold of Eastern Europe during the Great Vampire Epidemic from 1725 to 1755.

The rumors of vampires spread far and wide. Disease began taking hold of the Eastern European region, and as was the culture at the time, blamed the illnesses on supernatural causes. This was a time when knowledge of things like viruses and bacteria was relatively unknown.

In this day and age, many believe that the “vampire myth” actually was a disease itself. Experts began attributing many of the typical “signs” of being a vampire, and began looking at them as symptoms, rather than that of a mythical creature.

One such disease that scholars believe could have caused vampire hysteria is rabies. The disease’s name of Latin origin literally means “madness.” It is transmitted through bites of infected animals to humans. Symptoms that lined up with the vampire myth were noticed. Those with rabies can suffer horrible muscle contractions in their esophagus, which makes it hard, if not impossible to swallow anything. This is what eventually leads to “foaming at the mouth.” Another major symptom of rabies is hydrophobia, which is the fear of water. Within certain myths, vampires weren’t able to cross bodies of water without help from someone else.

Experts believe another disease perpetuating the myth was pellagra, which is a deficiency in vitamin B3. Typically, pellagra is contracted when a diet high in corn and alcohol is consumed. Europeans had brought corn back to Europe after finding it in America. But without cleaning it properly, pellagra can be brought back too. Symptoms that mimic that of what the public thought was vampiric include dermatitis, dementia, and even sensitivity to the sun – where it led to very pale skin, which is how many vampires were depicted.

Porphyria, is one other illness that these vampire myths could be attributed to. Porphyria also included symptoms like sensitivity to sunlight, aversion to garlic (because of its sulfur content) – because it could cause a flare-up. Facial disfigurement, where the gums would start to recede and a person’s front teeth could be seen, could have been mistaken for fangs.

Now, technology has evolved so much further, and we are much more advanced in medicine now, that we can say with much certainty that vampires do not exist, but rather diseases. However, the myths themselves will live on forever.

Planning a trip? Make sure you can go with Passport Health. Call or book online to schedule your appointment today.