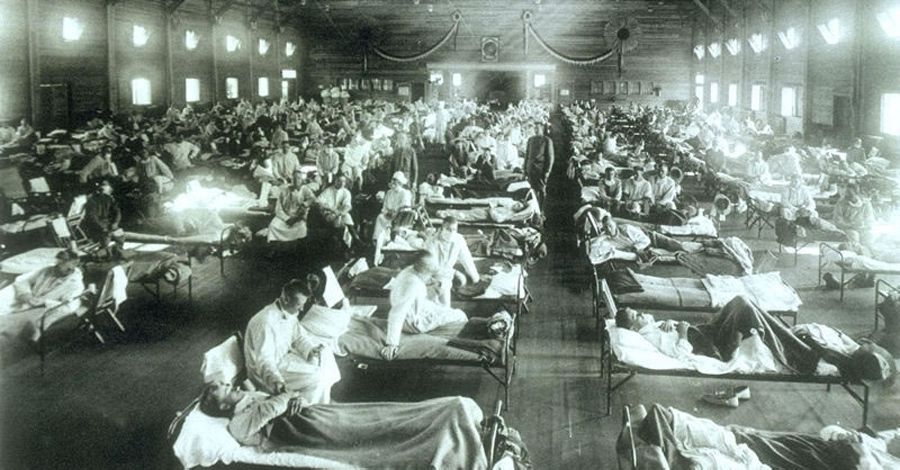 Imagine sending your daughter off to school, but she never comes home. That is what happened to Grace Nye, a mother from Toppenish, Washington, in October of 1918. A letter to her from her daughter’s headmaster reads as follows:

“Absolutely everything possible was done in the way of medical care and nursing. The sick was never left alone for one minute, someone was administering to their needs and looking after them and I want you to feel that in this sickness that your daughter has had as good attention as she possibly could have had in any hospital or home.”

Wondering about the flu?

Learn more about this widespread disease.

Or schedule you flu shot at Passport Health!

Harwood Hally, the headmaster, wrote this letter at the peak of an outbreak of what we now call the Spanish flu. This influenza virus killed millions of people throughout the world, possibly as much as five percent of the world’s population.

“This disease which has taken thousands upon thousands throughout the country was no worse here than elsewhere,” said Hally in his letter. His school had over 250 cases of the Spanish flu in October 1918, likely a large percentage of the school’s population. “[The outbreak] was not due to Chemawa or its location. It was a general disease everywhere.”

It’s difficult to imagine what this type of outbreak would be like today. In 1918, approximately 1.8 billion people inhabited this planet, 20 percent of the current population. Were this same pandemic to happen today, the number of illnesses would be astronomical. But, new research shows the Spanish flu and its associated pandemic may have been partially caused by an event we remember every November: World War I.

How the “Spanish Flu” Got Its Name

In order to fully understand the role World War I played in the spread of the Spanish Flu, we have to understand why it is called the Spanish Flu in the first place. During the Great War, most of Europe was involved in fighting for either the Central or Allied powers. The war generally lead to increased press censorship to stop enemy nations from learning potentially important strategic information. However, this censorship wasn’t the case in Spain.

As a non-combatant, Spain’s media openly reported on the spread of what came to be known as the Spanish flu. Ironically, the virus did not originate in the Iberian nation, but it was often claimed to have due to Spain being the only place reporting on the disease. We don’t know the exact way the Spanish flu spread, but we do know it reached Spain around May 22, 1918, when Madrid’s ABC newspaper first broke the story.

World War I and the Spanish Flu

The close quarters nature of military service and trench warfare helped the Spanish flu spread and mutate in a way we haven’t seen in the nearly 100 years since that time. In January of 1918, four months before the ABC report, the first case of the flu was identified in Haskell County, Kansas. On March 4, 1918, a case was documented at Fort Riley, Kansas, and by March 11, it had reached Queens, New York. Due to the nature of transportation at the time, and the amount of transport happening between the U.S. and Europe because of World War I, the virus quickly spread globally.

Normally, this might be the end of the story. These types of influenza spread aren’t uncommon. But, what came next was.

In August 1918, a more virulent strain of the Spanish flu was documented in France, Sierra Leone and the U.S. It is said that in the next 24 weeks the flu killed more people than AIDS killed in 24 years and the Black Death (bubonic plague) killed in a century.

New research suggests this strain was essentially created in the trenches of World War I as soldiers with mild strains of the virus were left in the trenches and those with severe illness were sent home. As they made the trip back home, they would infect those who came in contact with them, due to the highly contagious nature of the disease.

This newer and deadlier form of the virus wasn’t something new but rather a mutation. Those who recovered from the first strain of the virus in early 1918 were immune to this second strain. But still, thousands died throughout the world.

Could a Flu Pandemic Happen Today?

While current geopolitical circumstances are very different from those of 1918, a flu pandemic of this scale and nature if very possible today. The WHO, CDC and other organizations actively track social upheavals looking for deadlier strains of viruses that may be spreading with the population. But, it was also this pandemic that helped to create the modern tracking apparatus that we have today in hopes of avoiding another widespread deadly pandemic.

Researchers have found, as mentioned above, that those who had been exposed to the virus previously were either immune or only experienced slight symptoms. This is the role the flu vaccine plays for us today. If we are vaccinated, we can avoid the more dangerous variants that may arise and stay safe.

To learn more about influenza and the various vaccines available, see our flu portal.

Have you received your flu shot yet? Schedule your appointment today at your nearest Passport Health location.