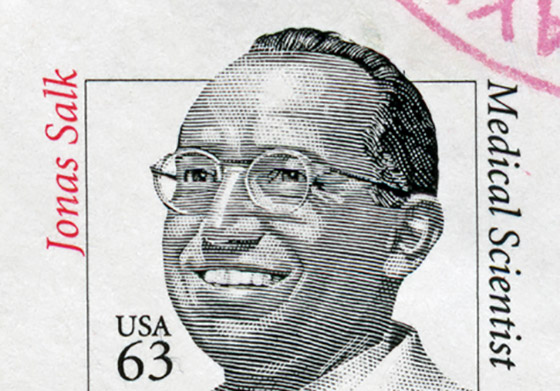 This year marks the 60th anniversary of one of the most remarkable global health advances to date: the injectable polio vaccine (IPV). This vaccine protects against the polio virus, also known as infantile paralysis. On April 12th, 1955, after the conclusion of one of the largest clinical trials in history, the vaccine, developed by medical researcher and virologist Jonas Salk, was deemed “safe,” “effective,” and “potent.”

Salk was an American physician born to immigrant parents. He chose to dedicate his life to medical research rather than becoming a practicing physician. In 1947, he took on a job at the University of Pittsburgh where he began research on polio, and, by 1951, he had developed a “killed virus” for a vaccine.

During the first set of safety trials, Salk tested the vaccine on more than 5,300 individuals, including himself, his wife, and his three sons. After no one experienced any bad side effects and blood samples showed that there were antibodies present against the disease, the experiments moved on to the field trial. The field trial consisted of 1.8 million first, second, and third graders and cost roughly $7.5 million dollars.

The trials were held across 44 US states, and much of the funding came from the March of the Dimes Foundation, the organization founded by United States President Franklin D. Roosevelt to eradicate polio in 1938.

The 1955 approval of the vaccine gave Salk the status of a national hero.  Indeed, President Dwight D. Eisenhower celebrated Salk and his achievement with a special citation ceremony held in the Rose Garden of the White House. Salk would later go on to launch his own research center, the Salk Center for Biological Studies.

Interestingly, Salk chose not to patent his vaccine, thus allowing anyone who may want or need to produce it to do so.  He had a vision of a world without polio and hoped to do everything he could to selflessly achieve that goal.

Once the vaccine had become widely available, polio cases dropped by 99 percent worldwide. Prior to the vaccine, the United States alone had 35,000 cases of polio each year.  Just two years after the introduction of the vaccine, the number of cases fell by almost 90 percent in the U.S.  Just four years later, polio had been eradicated in the country. The last reported case of polio in the U.S. was in 1991.

Want to know more about polio? Check out this interactive timeline!

Salk’s vaccine has played a crucial role in public health history. In 1988, polio continued to cripple children in 125 countries. During that year, Rotary International launched the Global Polio Eradication Initiative in partnership with the World Health Organization, UNICEF, and the U.S. Centers for Disease Control and Prevention. Today, polio remains endemic in only three countries: Afghanistan, Pakistan and Nigeria, and Nigeria has not had a case in the last nine months.

At one point, it had seemed that the oral polio vaccine (OPV), which was released later, would triumph over Salk’s.  However, the IPV has made a comeback. OPV was initially popular because of its low cost and ease of use; just a few drops taken orally provide immunity.  But, the oral vaccine has one major drawback: there is about a 1 in 750,000 chance that the vaccination can cause infection. While that is an extremely low probability, it is still too much of a risk for some countries and organizations that are trying to eradicate the disease.  As a result, the IPV has become increasingly more common throughout the world, and is the vaccine of choice in nations that have already eradicated the disease, like the United States and Canada.

Today, the WHO and the Global Polio Eradication Initiative have both added IPV to their plans for eradication of the virus. By the end of this year, at least one of the two doses given to children in the developing world will be the injectable vaccine. The Polio Eradication and Endgame Strategic Plan put forth by these groups plans on eventually trading in all oral vaccines for injectable variants.

Passport Health would like to acknowledge the man responsible for saving the lives of so many and protecting the lives of many others against the disease. Thanks to Jonas Salk, we now celebrate 60th year anniversary of one of the most influential vaccinations and the elimination of what used to be a debilitating virus in many countries across the globe.

For more information on polio and to find out if a polio vaccination is recommended for a country you may be traveling to, visit our Polio page.

Have you or anyone in your family been affected by polio?  Let us know in our comments section below or through Facebook or Twitter.