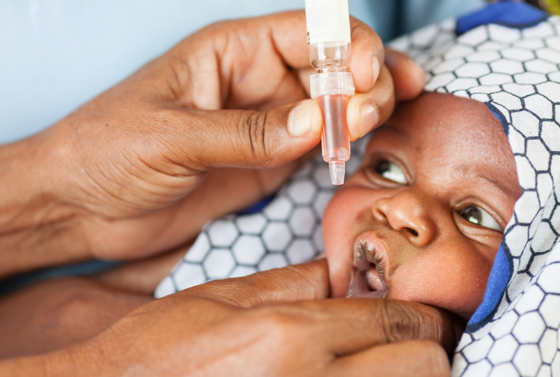 A new vaccine that is under development might just end the fight against polio and some other infectious diseases. In an effort funded by more than $600,000 in grant money from the Bill and Melinda Gates Foundation, researchers hope to create a synthetic polio vaccine that minimizes the probability of side effects that the oral vaccine can sometimes have.

The team of England-based researchers hopes to create a vaccine that protects against polio but does not include the live virus that oral and dermal polio vaccines contain. This type of vaccine is safer for use in developing countries, faster acting and easier to produce, making it ideal for use in countries like Pakistan and Nigeria where the disease is still endemic.

“The idea of a synthetic virus is that it contains no genome – it’s virus free,” Dave Stuart, a professor at Oxford University and member of the research team, said in an interview with BBC News. “It’s made, in a way, like a super-chemical, a complicated chemical, that assembles itself to look like the virus but has no way of ever replicating”.

Polio by the numbers:

This process is similar to some efforts that other groups have already undertaken to fight infectious diseases. Protein Sciences, the maker of flu vaccine, a cell-based and egg-free flu vaccine, uses a different method but has achieved the same goal of developing a non-viral vaccine. Many groups are also working on an Ebola vaccine that functions in a similar manner.

Stuart and his team hope to eradicate the polio virus through their work but, even with additional funding, they are still a few years away. Conservative estimates show that it could be five years before they have a vaccine that is ready for use.

In 2014, there were just 350 confirmed cases of polio, meaning it is possible that the disease could be eliminated by the time this new vaccine is ready. However, some groups in Pakistan and other regions are putting roadblocks in the path of vaccination efforts, and many of these cases end with aid workers being beaten or even killed.

Despite these issues, Stuart is confident that polio can be stopped and that his team’s research can be used for good in fighting other diseases, even if polio is gone by the time the vaccine is ready.

“Our aspiration is eventually to get rid of the virus and consign it to a few vials in the freezers of the Centers for Disease Control and Prevention in Georgia,” Stuart said.

For more information about polio and the current dermal polio vaccine that is offered in North America see Passport Health’s polio page.

Would you be willing to try a synthetic vaccine? Let us know in the comments section below, on our Facebook page, or via Twitter.