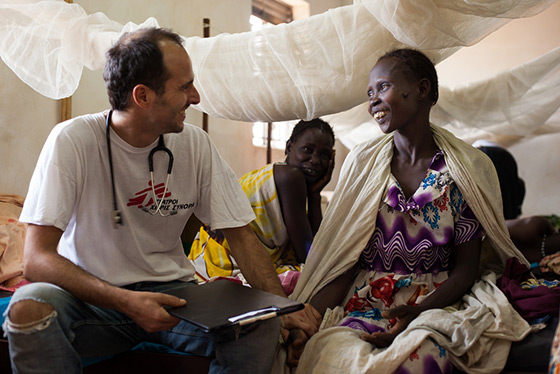 Today is National Doctor’s Day, and we would like to recognize those who have made a difference by bringing better health to communities all over the world. One particular group, Médecins Sans Frontières, has impacted the lives of millions throughout the globe and forever changed the face of international public health and humanitarian aid. A key tenet of the organization is that borders are political boundaries, and we must prioritize people’s health and rights above these boundaries. 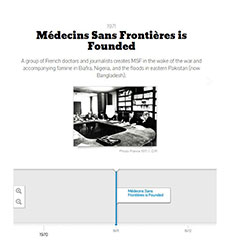 Image courtesy of MSF. Click here to view an interactive timeline of MSF’s work and history.

In 1968, a series of protests broke out all over the world in response to social conflicts, and many of these protests were rebellions against military and bureaucratic elites. The Parisian protests in May of that year were some of the most significant in history. Ten million workers and students took to the streets of Paris, France, in an effort to overthrow the government of General Charles de Gaulle. Amid these upheavals, a group of young doctors came together and decided to do something about the worldwide issues of war and famine. They sought out to recreate the concept of emergency aid.

They decided to travel around the world to find and help victims of war and disease. Not only would they reinvent the idea of emergency aid, but they also succeeded in creating a new brand of humanitarianism. This group would later become known as Médecins Sans Frontières, or Doctors Without Borders.

MSF was officially created on Dec. 22, 1971, and the organization at its founding was made up of 300 volunteers, including doctors, nurses, staff, and the 13 founders of the group. The organization holds the belief that people come first, meaning that everyone has the right to medical care regardless of gender, race, religion, creed or political affiliation.

Members of the organization display these virtues through their criticism of and work to end violence and violations of human rights in the areas where they are stationed. In the organization’s first year, two of the founders, Dr. Bernard Kouchner and Dr. Max Recamier, witnessed civilians starve and die because of a blockade set up by Nigerian forces.  The doctors criticized the Nigerian government, as well as the Red Cross, for the incident.

Seeing these two men as an example, doctors began speaking up shortly thereafter. This laid the foundation for a new form of humanitarianism; one in which people would not be afraid of ignoring political or religious boundaries to put the welfare of those suffering first. 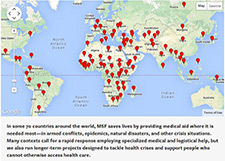 Image courtesy of MSF. Click here to view the interactive map of countries the organization operates in.

Today, MSF is present in 70 countries around the world, serving those who require medical aid the most. The group provides aid in armed conflicts, epidemics, natural disasters, and other forms of crisis. Although many of these situations call for rapid response and specialized medical attention, the organization also runs long-term projects to provide support and handle health crises in areas where people have no other way of accessing health care. Some of the countries the group is stationed in are: Afghanistan, Central African Republic, Democratic Republic of Congo, South Sudan and Syria

The organization is considered to be very reputable by experts, partly because  of MSF’s accountability with reporting the use of its funds. According to MSF-USA,  87 cents of every dollar directly supports international programs. The organization has taken steps to limit executive compensation and even limits the amount the executive director is paid to no more than three times the pay of the lowest full-time employee.  MSF works to limit other administrative costs by booking economy class flights for travel, using budget hotels, and minimizing its fundraising costs.

”We are not sure that words can always save lives, but we know that silence can certainly kill.”
Dr. James Orbinski, former president MSF’s International Council, accepting the Nobel Peace Prize on behalf of MSF in 1999.

In 1999, MSF received the Nobel Prize for the “recognition of the organization’s pioneering humanitarian work on several continents.” The proceeds from the prize were used to set up a Neglected Disease Fund, which helped provide treatment for diseases such as Chagas, malaria, and sleeping sickness.  This prize is just one of many awards received by MSF since its founding.

Passport Health recognizes the importance of global public health awareness and the efforts made to provide aid to others by groups like MSF. We also stress the need for vaccinations and travel medicine for everyone. Before taking the next step and embarking on your own journey to help others through organizations such as MSF or starting your own personal mission, make sure you meet the international health standards and have taken all preventive health measures recommended for the area you wish to work in.

It is your job to make sure that you are doing your part to protect yourself from diseases and illnesses, so that you may protect others. Schedule an appointment at a Passport Health travel clinic to make sure you are caught up on all the vaccines and travel medicines you need.