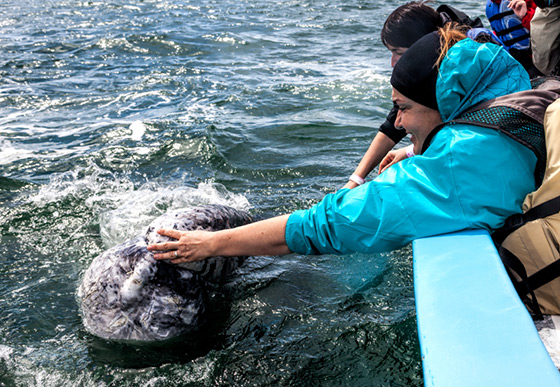 Whale watching is just one of many activities that can make travelers motion sick.

Motion sickness affects one in every three people. This means that chances are you or someone you know suffers from cold sweats, uneasiness, nausea, and vomiting whenever hitting the road or venturing out at sea. A recent study shows that it’s not just pure luck that determines whether you are going to sail on smoothly by, but rather that some people are genetically predisposed to motion sickness.

“Until now there’s been a poor understanding of the genetics of motion sickness, despite it being a fairly common condition…These findings could help provide clues about the causes of motion sickness and other related conditions, and how to treat them, which is very exciting.”
-Bethann Hromatka, scientist at 23andMe and lead author of the study

The first ever genome-wide study conducted on motion sickness estimates that up to 70 percent of variation in risk for motion sickness is due to genetics. The genetics company behind the study, 23andMe, has published numerous genome-wide association studies; however, this was the first of the company’s research to include association results across a broad set of phenotype, the observable physical characteristics of a person or other species.

Prior research on motion sickness had suggested that the feelings of illness could be hereditary, and the new study confirms this with its finding that several genes may be linked to the nausea associated with movement in a car or on a boat.  In fact, 35 genetic factors can now be tied to motion sickness.

Genetic data from over 80,000 23andMe customers was used in the study to identify these factors. Researchers discovered that many of these factors that predispose an individual to motion sickness, known as single-nucleotide polymorphisms (SNPs), are in or related to genes involved with balance and ear, eye, and brain development. Other SNPs that are linked to the nervous system and glucose levels in the body may also affect motion sickness. The study found that several of these SNPs display sex-specific effects, with the effects being up to three times stronger in women.

Research showed that risk for motion sickness may be tied to a greater likelihood of experiencing migraines, morning sickness and vertigo. The work also identified associations with motion sickness and lifestyle. One such example was in sleeping patterns. It turns out there is a link between being a poor sleeper and having a propensity for motion sickness. Although it is still unclear what the specific drivers behind motion sickness actually are, these findings can help researchers identify the risk factors of the condition and develop future treatments.

Motion sickness does not usually require immediate medical attention, unless the sufferer becomes dehydrated from constant vomiting. Generally, the effects of motion sickness wear off for those who suffer from the condition slowly after the motion stops. This doesn’t change the fact that motion sickness can be very uncomfortable and cause a lot of stress for someone who is dealing with the symptoms while on the go, however.

The easiest way to deal with motion sickness is to prevent it. The most convenient form of prevention is taking medication before you depart. Transderm Scōp®, a simple patch you place behind your ear 4 hours before motion will start, can help reduce symptoms.  Added precautions such as staying focused while in a moving vehicle (by focusing on the horizon), avoiding focusing on objects that will be moving with you (like books or tablets), not partaking of alcoholic beverages and not smoking are also recommended to lessen the effects of motion sickness.  Your Passport Health travel medicine specialist can help you identify the most beneficial ways for you to do deal with this illness on journey.