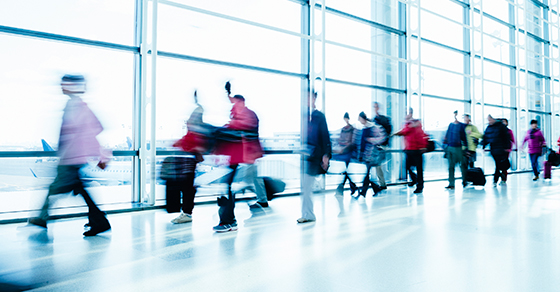 The measles cases in Disneyland (a crowded environment through which many people pass) have been extremely well documented by the media. Similarly, a recent CDC report shows the potential effects of one infected individual passing through an airport and the potential harm that vaccine preventable diseases can cause. This information is equally applicable to an airport, Disneyland, a grocery store, or a school. According to the CDC, in January, 2014, an individual with measles passed through an undisclosed airport, and, within a four-hour span, he or she infected three other people.

Initial disease transmission into the airport environment is likely to have occurred on January 17, 2014, at an international gate of the airport. However, the infections are believed to have occurred in a terminal that only serviced domestic flights. Measles has a two week incubation period, so officials had no idea that any event had transpired until February 1 when Patient 1, a 21-year-old male, was diagnosed with the infection. The three other patients were all diagnosed by February 5.

The CDC was unable to identify which person of the four was the first to be infected, but it was able to create a kind of timeline of events. Patients 1 and 2 were on the same flight and were seated near each other. Both people spent time at the departure gate before leaving, as did Patients 3 and 4. Laboratory tests confirmed that all four were infected with the same strain of measles and that none of the infected individuals had been vaccinated against the disease.

Measles is a highly contagious disease caused by a virus. Although still common in many parts of the world, it was declared officially eradicated in the United States in 2000. Due to a lack of vaccination in some segments of the population, however, measles cases have begun to rise again domestically. The virus is spread through droplets from coughing, sneezing or talking and can survive on surfaces for up to two hours.

It is estimated that nine out of ten unvaccinated individuals are susceptible to the disease if they come in contact with it, making vaccination for international travelers even more important as the amount of traffic that goes through an airport greatly increases the chance of coming into contact with infected individuals.

This CDC report shows the dangers of being part of an unvaccinated population and how fast diseases can spread, especially in areas in which people are in close proximity to one another. The best way to avoid the virus is by receiving the MMR vaccine or an adult booster. The vaccine protects against three diseases: measles, mumps and rubella, all of which have been making a resurgence through unvaccinated populations.

What do you do while traveling to avoid diseases, outside of vaccination? Comment below or on the Passport Health Facebook page to leave your thoughts.