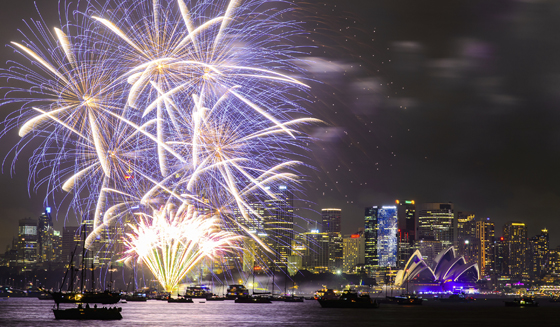 What better day than New Year’s Day to get your travel planning for 2015 underway and to perhaps consider taking a special trip to ring in the next New Year in an exotic destination. Indeed, the best way to make sure you get the most out of your experience is to start planning for next year now. Below are some of the top places to travel throughout the globe (starting east and moving west), with tips to keep you safe and enjoying the festivities, for your New Year’s Eve travels next year.

If you would like to ring in the New Year in a big way, then Sydney is your best bet. The first major city in the world to celebrate the New Year holds two fireworks shows, one at 9pm and one at 12am. Both displays are extensive and will make for memorable parts of what is sure to be an amazing trip. Remember that Hepatitis vaccines are suggested for travel to Australia as can be the yellow fever and japanese encephalitis vaccines, especially if you are planning an extended stay.

The Great Wall is not the only awe-inspiring thing to see in China, especially come New Year’s Eve. All along Victoria Harbor, fireworks and celebrations make for a sight to behold. Even though Chinese New Year is a larger celebration than what occurs on December 31, Hong Kong doesn’t shy away from putting on a spectacular show on this day as well. To get the best view, head down to the harbor or get to the roof of almost any of the skyscrapers in the city to see a unique and amazing fireworks spectacular. In terms of medical preparation, the same basic recommendations apply for travel to Hong Kong as they do for Australia. However, a typhoid vaccine may also be suggested for travel to Hong Kong.

Moving further west, Berlin features a massive street party for New Year’s. Starting on the evening of December 31, the area between the Brandenburg Gate and Victory Column features an enormous party that lasts through the next morning. The festival includes music performances, fireworks, food, and light shows with plenty of celebrity appearances. As a fully industrialized and developed nation that is fairly far north, there are not a lot of additional vaccines needed for travel to Germany. However, it is always a good idea to make sure you are up to date on all routine immunizations and that you have received an annual flu shot before travel. Also, when participating in the New Year’s festivities be sure to exercise caution and good sense as you would in any crowded party environment.

This city on the southern tip of Africa has a unique tradition called Kaapse Klopse. Based off an old custom when New Year’s Day provided a rare holiday for slaves, Klopse features parades and musical performances by local groups dressed in bright, traditional clothing. The festivities start on December 31, but they carry on throughout January to be an almost month long celebration throughout the area. With plenty of entertainment, good food, and fun, Kaapse Klopse is a fantastic way to ring in the New Year. Remember that for travel to South Africa, Typhoid, hepatitis and yellow fever vaccinations are typically suggested, and antimalarial medications may be advised as well.

Hogmanay is the Scottish celebration of New Year’s, and it begins on December 31 and lasts through January 2. Believed to be an amalgamation of Norse and Gaelic year-end celebrations, Hogmanay features a wide variety of traditions including the swinging of fireballs (chicken wire encircling lit paper), and, in coastal areas, it will even involve the burning of a Viking longship. Edinburgh’s celebration has been recognized as one of the largest celebrations worldwide, and it also includes enormous street parties and musical acts, making for a fun and unique celebration that works in some traditional culture. The United Kingdom is much like the United States in terms of health considerations, but it is still advisable to be up to date on all routine immunizations and especially your measles vaccine.

With the claim of hosting the biggest fireworks show in South America, Valparaiso offers a visual spectacular on December 31. While the ocean water is too chilly to swim in, the beaches of this coastal city provide an amazing view of the fireworks displays and host extensive musical acts and festivities that follow. It is not uncommon for the parties to last well into the day of January 1, but, be warned, Valparaiso’s celebrations have a reputation for becoming a bit crazy and necessitating police involvement. However, the festivities here are also ranked as one of the best places to celebrate the New Year in South America, let alone the world. If you decide to participate, be sure to wear a money belt to keep your valuables safe, and do not wear expensive jewelry that could make you a target for thieves. Additionally, vaccinations for Chile provide the best way to avoid disease, and Hepatitis, typhoid and routine vaccinations are all recommended. It is also a good idea to pack antidiarrheal medication.

Do you plan on making a big New Year’s trip? Feel free to comment below or on the Passport Health Facebook page with your plans!