Sophie Blackall isn’t just the illustrator of the very popular “Ivy and Bean” series of children’s books, she is also a huge proponent of measles vaccination. As part of that effort, she is now working with the American Academy of Pediatrics to create engaging posters that feature her characters. The AAP hopes doctors will post these around their offices to make vaccination resonate with their young patients..

“We wanted to give doctors something that would speak to the kids, something funny and eye-catching that they can put up in the waiting room and that families can discuss,” said Blackall in an interview with NPR. “It sometimes gets lost in the whole noise about children’s health, but it’s so important.”

Measles is a highly contagious respiratory disease which causes fever, runny nose, cough, and a rash all over the body. About one out of 10 children with measles also gets an ear infection, and up to one out of 20 children who gets infected also gets pneumonia. For every 1,000 children who get measles, one to two will die. Indeed, measles is a serious matter, and children should be aware of this potential threat.

As Blackall points out, measles is an entirely preventable disease that can be avoided through basic vaccination and a focus on personal health. 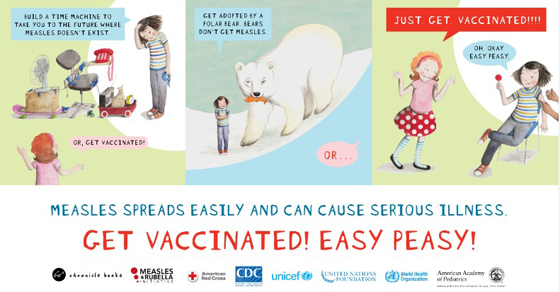 Over the last year, the world has seen a resurgence in measles in areas that used to be relatively free of the disease, with outbreaks in the United States (Ohio) and the United Kingdom (Wales). The disease is still endemic to some less developed regions as well. Lack of vaccination is seen as a main cause for both the resurgence and persistence of the disease.

We would like to hear from you! What other children’s characters, or even adult characters, do you think could be useful in a campaign like this? Feel free to post them below in the comments or over on our Facebook page!