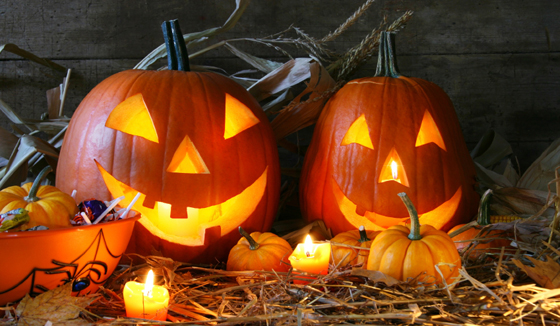 Happy Halloween! Nearly all of us are familiar with Halloween and the celebrations that come with this holiday. Throughout much of North America, children will go door to door hoping for tasty treats, and, in many other parts of the world, celebrations are very similar. However, in some cases, local traditions are extremely different from those of the US and Canada. Here are four different events throughout the world that all happen in the fall and all celebrate the dead: Allhallowtide, Día de los Muertos, Pitru Paksha, and Obon. After reading about these fascinating traditions, we bet you you are going to want to plan your next trip abroad during the end of October!

Allhallowtide is the triduum (three day period) that encompasses Hallowe’en, Hallowmas (All Saints’ Day) and All Souls Day. It is believed that the date of All Saints’ Day was established by Pope Gregory III around the year 740.

Hallowe’en goes by many names: Halloween (most commonly), All Hallow’s Eve, and a few others, but, while the name has changed, traditions have been more or less the same for many years.

All Saints’ Day (originally known as Hallowmas) takes place on November 1, and it is a holy day to honor saints and martyrs, both known and unknown. For many Christian sects, especially Catholics, it is a day to attend church and honor those who have passed.

All Souls’ Day falls on November 2, and it is a day to honor all faithful Christians.

Día de los Muertos, or Day of the Dead, is a Latin American holiday observed mainly in Mexico. Much like All Saints’ Day, the holiday focuses on remembering the dead, but, instead of religious figures, it has a distinct focus on close family and friends who have passed. Building private altars called ofrendas, bringing gifts like candy skulls or marigolds to graves, and leaving possessions for the dead are all common practices. It is a very colorful and festive holiday, making it similar in this regard to Asia’s Diwali.

The practices of remembrance have spread throughout Latin America, and there are a variety of variations on Dia de los Muertos in Brazil, Haiti, Bolivia, Ecuador, and even parts of the United States.

Held from mid-July through the end of August, depending on the region, Obon is a Japanese Buddhist festival that honors the spirit of one’s ancestors. It lasts for three days and features a variety of traditions and activities. Two of the most notable are the Bon Odori and Toro Nagashi.

The Bon Odori, or Bon Dance, is a traditional folk dance meant to welcome the spirits of the dead. Each region of Japan has its own version of the Bon Odori. Often, the dance will feature an important aspect of the area’s history.

Toro Nagashi is a ceremony in which paper lanterns are floated either down river or into a body of water. The ceremony represents the traditional belief that humans came from water and so will eventually return to it. Unlike many other ceremonies associated with holidays and the dead, Toro Nagashi will take place at different times throughout the year, generally to mark specific tragic events like the bombing of Hiroshima and Nagasaki or the 2011 Tsunami.

Literally translated as “fortnight of the ancestors,” Pitru Paksha is a 16-day holiday during which Hindus celebrate their ancestors. It generally takes place between September and October, but, like Obon, it can vary by region within India and Southeast Asia. The most important ceremony of Pitru Paksha is the Shraddha, a ritual that helps ensure that the soul of an ancestor goes to heaven.

The Shraddha is performed on a specific date during the Pitru Paksha, usually when the ancestor or parent died. There are exceptions for this based on whether someone died in a particular manner or had achieved a certain status while still alive. The ceremony is generally carried out by the eldest son who takes a purifying bath before starting the ceremony. The Shraddha then involves offering food to the ancestors, and it is a very sacred rite. The offering is considered accepted if a crow, a symbol of Yama or the spirit of the ancestors, arrives and eats the food.

We’d love to hear about your Halloween and ancestral traditions as well, or if you celebrate one of the traditions we have listed above. Have you ever traveled overseas for a Halloween event? Comment below and tell us what you do!