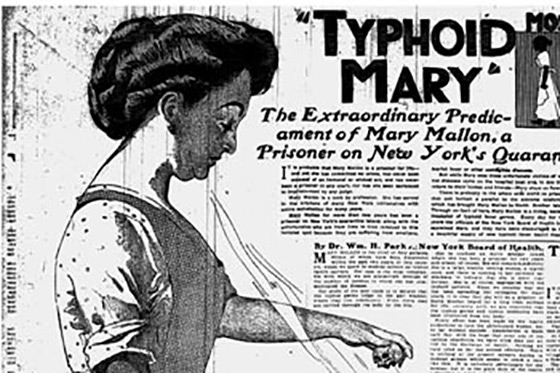 The case of Typhoid Mary sparked a public health debate in early 1900s New York, and her legacy continues to be discussed to this day. March marks the 100th anniversary of Mary Mallon, an Irish cook who inadvertently infected multiple people with typhoid fever and was later placed in isolated quarantine for over 20 years of her life.

Typhoid fever is caused by a strain of Salmonella bacteria, resulting in high fever, abdominal pain and loss of appetite. Mary was a carrier of typhoid, meaning she appeared healthy but continued to carry the bacteria in her body. Her story is unique because it brought to light the conflicting priorities of public health policies and individual freedom. During that time, typhoid had no cure and was sometimes fatal. Mary is thought to have caused over seven outbreaks, 50 infections and three fatalities over a period of 15 years.  What can we learn from her case?  read on to find out!

Mary was an Irish immigrant to the U.S., later establishing herself as a cook for wealthy families in the New York City area. She was skilled at her job, but she was unfortunately also skilled at something else: passing on typhoid to the unsuspecting families she worked for. Typhoid is often spread by eating or drinking foods that have been handled by someone infected with the feces-shed bacteria. In Mary’s case, it was her poor hygiene that allowed her to spread the disease. However, Mary was unaware of her health status, as she had never contracted typhoid before. She would accept new employment with a family, and, when the majority of the household fell ill, she moved on to another family.

In 1906, six years after the start of her career, Mary was finally suspected. She was working for a family in Long Island, NY, when the household fell ill with typhoid. The disease was uncommon in the area at the time, and health officials were summoned to work on the case. An epidemiologist, William Soper, finally narrowed the culprit down to Mary. He compiled a history of her employment and successive typhoid outbreaks. When Mary was found working for another family in 1907, Soper confronted her with the news. She was very hostile and refused to speak to him further.

Health officials and police then took a protesting Mary into custody. She was placed into quarantine in a bungalow on North Brother Island, NY. During this time, it was found that she harbored typhoid bacteria in her system while appearing outwardly healthy. She denied being infected with typhoid at some point in her life, vehemently objected her isolation and refused to cooperate with anyone regarding her case. Three years later, she was released on the condition that she never work as a cook again.

For the next five years, Mary disappeared from public eye until a typhoid outbreak at a hospital in 1915 brought officials straight to her. She was working as a cook under the assumed name of Mary Brown. She was then placed back into quarantine where she remained until her death in 1938.

“Mary is thought to have caused over seven outbreaks, 50 infections and three fatalities over a period of 15 years.””

Typhoid Mary, as she became known, is important to the history of medicine and public health. The concept of a healthy individual carrying a disease was completely novel at the time. The public became fascinated with her, and many negative articles and illustrations were published. Her subsequent isolation has inspired debate about the issue of sacrificing an individual’s liberties for the common good. Was the government right in placing Mary into quarantine? Was she a villain or a victim? Typhoid Mary’s case was a significant milestone during a time when microbes were just discovered to cause the spread of disease.

Although typhoid was becoming less prevalent by the 1900s, antibiotics were yet to be discovered, and it still killed many of people each year as hand-washing and other proper sanitation methods were not widely practiced. Better hygiene practices are now long established, but Mary’s case continues to intrigue researchers today. Recently, a team of scientists discovered why carriers like Mary are able to remain healthy yet spread typhoid. The bacteria are able to evade detection by hiding in the body’s immune cells and lying dormant for long periods of time in certain people.

Nowadays, typhoid fever can be prevented with vaccination and treated with antibiotics, and it is rare in the developed world. According to the CDC, 75% of U.S. cases are acquired while traveling abroad. This highlights the importance of taking care of your health while enjoying the delights of international travel. Typhoid is still common in the developing world, affecting 21.5 million people a year. Travelers to Asia, Africa and Latin America are most at risk. Prevent yourself from acquiring typhoid by practicing good food and water safety and avoiding foods or water that may have been contaminated, such as raw vegetables that cannot be peeled.

If you are traveling to a country where typhoid is common, consider getting vaccinated. The vaccine is available in two forms: as an injection or taken orally. Visit the nearest Passport Health clinic location and talk to a travel medicine specialist to discuss your health and travel needs. Being able to enjoy your vacation or business trip is important, and so is your health.

Do you find Typhoid Mary interesting? Let us know in the comments section below!