How Does the Flu Hurt Office Productivity? 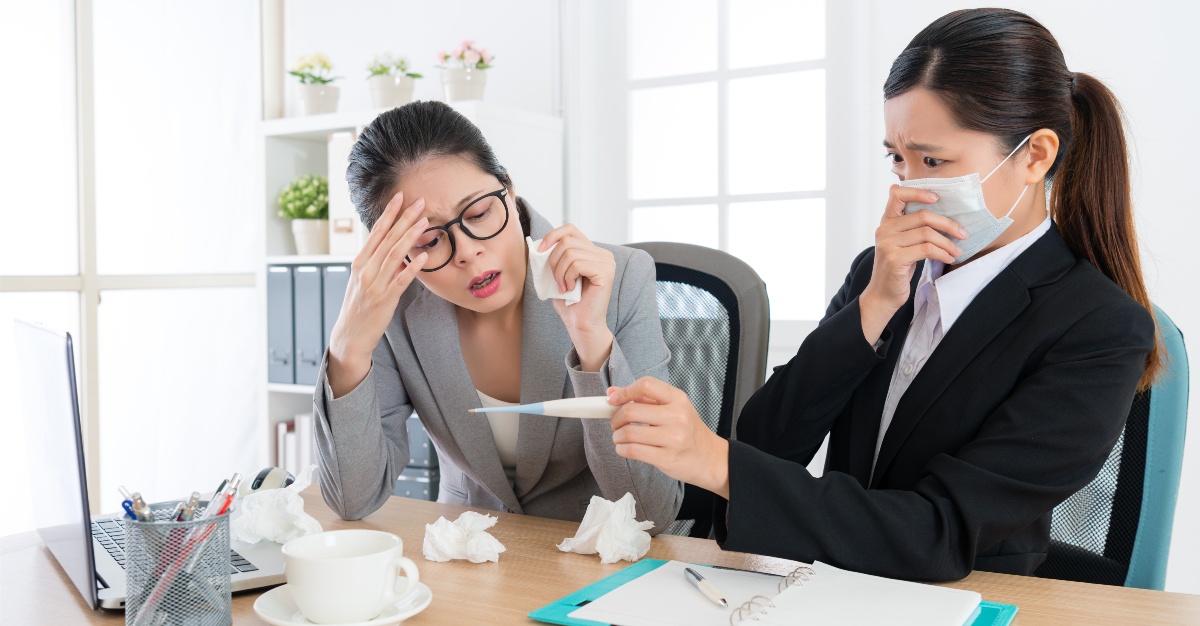 The flu season can be a company’s worst nightmare.

While many employees feel pressured to carry on with their jobs as if they’re weren’t sick, that’s not always for the best. According to Globe and Mail, many now think a sick employee who’s still working may be making things worse for the company.

Sick employees tend to still come to work and can barely do the minimum amount of their work. Making things worse, they also have a high potential to infect those around them. Altogether, it’s not the sick days that do the most damage during flu season.

Most negative effects come from less productivity in sick employees. Office morale can also lower during the season, all of which create a loss in revenue.

Employees Avoid Sick Days and Work With the Flu

Even a hard-working sick employee is hurting the business. Coming in sick and doing the least amount of work comes nowhere close to an employee who is 100 percent healthy.

According to Small Biz Trends, “Approximately 70 percent of workers go to work even when they’re sick.” Even if they have sick days to use, the reasons for this may vary. An employee looking to please a strict boss may try to tough out the flu. Some employees may even be called workaholics and can’t fathom the idea of calling out sick.

So many sick people working near one another is bound to cause a flu outbreak. Those working in an open office or shared area make this even more likely.

Whether it’s employees trying to save their sick days, working against deadlines, or simply thinking it shows initiative to still come in to work, working while sick can really hurt office productivity.

Going to work sick can lead to a longer recovery time since those infected aren’t taking time off to recoup and get better. This can also mean a longer amount of time that an employee isn’t working to their full potential. From there, deadlines might not get met and projects could stall. Employees then find themselves facing even more work to catch up while never giving their bodies a chance to rest.

Along with sick employees trying to go to work, the flu can lower office morale.

If people work alongside each other, germs are bound to spread amongst coworkers. The sick employees can also lead to more long-term productivity issues such as strained relationships. For example, if employees need to deal with illnesses it can, “put a strain on office communication and relationships.” The business would struggle on those projects that need the help of various employees.

Any employer knows that heathy employees tend to be happy employees. You tend to have a great work energy and culture that allows everyone to mesh well together and meet goals and deadlines.

But, if your team is no longer communicating well together, their drive is severely affected. Even the workers without the flu cannot be as productive. They get used to dealing with sick coworkers who are unable to hold up their responsibilities.

Plus, employees who are constantly battling illnesses aren’t likely to have an especially high morale to begin with. One unexpected issue here could even be higher employee turnover rates. This negative turn in events can lead to a loss in revenue for the business. Spending on HR-related expenses increases with new hiring and training costs.

The Pasadena Star News recently reported on some of those recent flu-related costs. A recent update from the CDC and one executive coaching firm estimated over $21 billion dollars lost in the U.S. due to the flu. This number accounts for all forms of lost productivity from the virus.

What Can Employers Do?

Like many people during the flu season, employers aren’t helpless against that number.

Do your best to promote flu vaccinations within the office and create an environment free of the virus. Encourage employees to take those sick days to recoup from a bout with the flu. Communication also appears to be an office key during the flu season. Ensure that employees communicate well with each other despite some workers needing time off.

The seasons have changed and the flu season has now started. It’s necessary to stress to your employees the importance of taking care of themselves and arming themselves against the flu. If possible, provide on-site flu clinics so employees don’t need to take time off to get flu vaccines.

Highlight the basics of self-protection such as using hand sanitizer, washing your hands throughout the day, covering your mouth when you cough, and not sharing items with coworkers that could be potentially sick.

If your business can provide paid sick days do so as incentive for employees to actually use them. If sick employees aren’t in the office, they cannot infect other coworkers. The flu season can lower a company’s productivity and all it takes is one sick employee who decides to work while sick.

Do you need more information to keep your business flu-free this season? Passport Health can help! Schedule an appointment with your local Passport Health clinic by calling or fill out a contact form now.